On Leaning In and Being Maxed Out

There have been books and articles in the news lately about working mothers being “maxed out” and also about women “leaning in” for career advancement.   This essay isn’t about me, it’s about my mom, and others of her generation- the early ones, who leaned in and for whom being maxed out seemed okay.

I was born in the USSR, and my brother was born in India.  My parents arrived in the USA with a 1 year old and a 3 year old, two suit cases, and some rubles, which were a nearly worthless Soviet currency.  My mother’s father gave her his life savings to pay for our plane tickets. We had no relatives or friends in America and neither of my parents had ever driven a car.

As soon as my mother realized her physics degree wasn’t going to make her employable, she enrolled in university to pursue a master’s degree in electrical engineering.  We didn’t go to daycare.  She dragged us to school and to computer labs and we played with boxes of computer punch cards while she did her homework.   We were told to watch TV so that we could learn English, and we were enrolled in school as soon as possible, which for me meant being younger than the other kids in my class.  The choices they made showed how much they cared about me and my brother, but their daily lives didn’t revolve around us.

And so it went on.  My mom cooked, and if we didn’t like what she made, we could use the microwave to make frozen pizzas.  Nobody was home when we got back from school, but we didn’t think that was weird.  My parents’ lives were about their kids, but not about always being there to attend to them. Somehow we got all the lessons- music, ballet, photography, art, even horseback riding- to make sure any hidden talents had an opportunity to flourish.  But I never expected that my parents would be there to watch me do sports or other activities.  Why would they be?

My mother got her third master’s degree when I was in high school, this time it was in computer science.  This was while she worked full time at Ford Motor Company.  Her career was marked by achievement, and scarred by blatant discrimination that was the norm at that time.  Despite all of this adversity, she never gave up pursuing her career.

There was only one priority in our household, it was simple- academic excellence.  My parents always said nobody could steal your education, it’s the one thing that is yours and can’t be taken away.  So we ate sugar cereal and microwave pizza and watched a lot of TV, and we were left alone most of the time, but we did well in school because we understood the importance of it.  It was the one thing our parents asked us to do well.

Lately there are new books and articles about women Leaning In to their careers, and about moms being Maxed Out, and I’d really love to know how my parents survived raising us while pursuing their careers, and without freaking out about it.

I sent this essay to my lovable mother, and this was her short and telling reply,

I think that somebody is making money brainwashing young people on how difficult it is to do natural and obvious stuff. 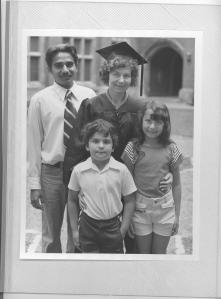 Filed under Essays, My Mom